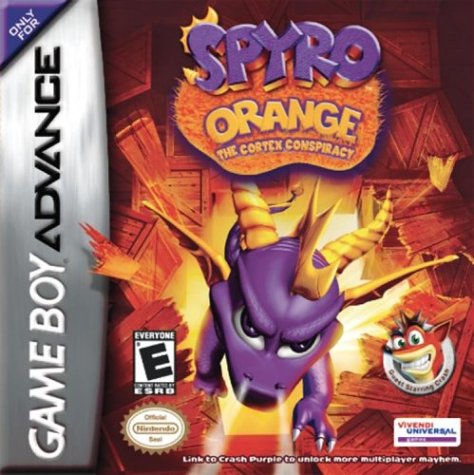 "li" Old-school giant bosses at the end of each level "li" Link with up to 3 friends for wild multi-player action, in modes like Party Games, Wager Games and Card Trading

Two game worlds merge as Spyro and Crash team up to battle their worst enemies, Dr. Neo Cortex and Ripto. Enjoy single-player action with more than 25 challenging mini games or link up to 4 players for numerous multiplayer modes including Party Games, Wager Games and Card Trading. Connecting both titles gives gamers the option of unlocking special content and allows them to trade or wager cards with their friends.

pyro's new Game Boy Advance cart is a weird collection of differing ideas. It breaks from the dragon's latest handheld entries by abandoning an isometric view in favor of a side-scrolling vantage point for the platforming sections â which, for us, is a good thing. But, unfortunately, the jumping is painful as all get-out.

Another shift for the franchise is the card trading option offered in conjunction with Crash Bandicoot Purple: Ripto's Rampage. This feature isn't particularly compelling, mostly because the cards don't look terribly cool and they don't do anything besides open up characters to use in the linked gamesÂ â a bonus that I could care less about.

And about those minigames, most are like a single level from a classic titleÂ â Breakout, Asteroids, and the Test Your Might sections from Mortal Kombat are each used over and over. You'll encounter five per world and probably dread each one. I will say that the minigames in Spyro are far more fun than its sister title, though.

"p"Spyro Orange is just a mishmash of concepts that never really gel into anything great."br""br""b"Concept:"br"Mix a healthy dose of minigames into the action/platform soup. Include something about cards â kids love cards these days "br""br""b"Graphics:"br" 3D-esque character models and environments with many levels of detail try to make this stand out "br""br""b"Sound:"br" It's GBAâ¦and it's a little below current portable par

Playability:
Boss battles are tough, but not fun

Entertainment:
With no part executed particularly well, this is one sad little cartridge

2nd Opinion:
Wow, five years ago the prospect of Crash and Spyro joining forces would have been pretty damn exciting. Today, I just don't really care about these characters anymore. Spyro Orange (like its Crash counterpart) is largely a selection of minigames loosely strung together with turgid side-scrolling platforming. In theory, the card-trading and cross-game sharing features are cool, but I highly doubt this mediocre addition will generate a kiddie game phenomenon."br""br"Rated: "b"6 out of 10"br"Editor: "b"Matt Helgeson"br""br"

Stay safe, We are here to support you